OSAKA, Japan – After enduring a frustrating year in which he has fought only once, unified world super bantamweight champion Guillermo “The Jackal” Rigondeaux (14-0, 9 KOs) is prepared to defend his World Boxing Organization (WBO) title belt this Wednesday, New Year’s Eve, against WBO No. 6 rated challenger Hisashi Amagasa (28-4-2, 19 KOs) at Bodymaker Colosseum in Osaka, Japan.

Rigondeaux, who resides in Miami, is also the World Boxing Association (WBA) Super and The Ring Magazine super bantamweight champion.

The 34-year-old Rigondeaux, a two-time Olympic gold medalist from Cuba, arrived Dec. 21 in Japan and the pound-for-pound star is extremely grateful for the overwhelmingly warm reception he has received from countless Japanese boxing fans who’ve watched him train or approached him in Osaka.

Last July in Macao, Rigondeaux successfully defended his WBO/WBA Super titles, destroying challenger Sod Kokietgym (63-2-1) in the opening round of the ultra-skilled Cuban’s lone fight to date in 2014.

The 5′ 10 ½” Amagasa towers over the diminutive Rigondeaux, who is 6 ½ inches shorter than his Japanese opponent. Rigondeaux, however, isn’t concerned in the least about their differences in height because of his past success against many taller foes.

“This is my second time fighting in Asia this year,” Rigondeaux said. “I am very 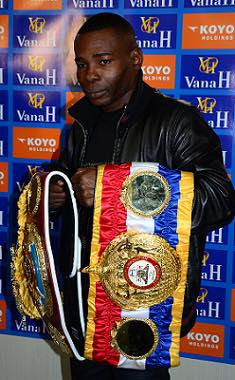 frustrated that the other world belt holders are running scared and won’t fight me. It’s disgraceful that we couldn’t find a world-class, 122-pound fighter to fight me, so, I would like to thank Amagasa for dropping down from featherweight (126 lbs. division) to challenge me. I will put on an explosive fireworks display on New Year’s Eve in Japan.”

Unfortunately, Rigondeaux vs. Amagasa will not be televised in the US or Europe, however, there will be an estimated 30-million Japanese fans tuning in to
watch ‘Rigo’ perform.

Japanese press have reported that Rigondeaux is the biggest star to fight in Japan in nearly a quarter-century, since “Iron” Mike Tyson fought againstJames “Buster” Douglas there in February 1990, describing Rigondeaux as a “Monster Superstar.”

‘We have already been offered a fight against another Japanese challenger in Japan this coming May,” Rigondeaux’ managerGary Hyde added. “Rigondeaux is in tremendous condition, as always, and we are very confident going into this fight on New Year’s Eve that ‘Rigo’ will put on a another stellar performance.

“In January, we will sit down and discuss the terms of a promotional contract that was initially offered to us this past summer and is now back on the table. Hopefully, we will come to an agreement with this promotional company and ‘Rigo’ will be back fighting on mainstream television networks in 2015.”

Hyde also reported that if, as reports have circulated, WBC super bantamweight champion Leo Santa Cruz (20-0-1, 16 KOs) is seriously interested in fighting Rigondeaux, “Rigo” will return from Japan to fight Santa Cruz in a major unification bout January 17 in Las Vegas.  Santa Cruz is scheduled to fight an opponent to be determined in the 12-round co-feature on a card headlined by the WBC heavyweight title fight, airing live from MGM Grand on Showtime, between defending champion Bermane Stiverne and mandatory challenger Deontay Wilder.