LAS VEGAS  – World Boxing Association (WBA) Interim Cruiserweight World champion Beibut Shumenov (16-2, 10 KOs) makes his first title defense this Saturday night (May 21) against WBA No. 11-rated Junior “Hurricane” Wright (15-1-1, 12 KOs) at The Chelsea inside of The Cosmopolitan of Las Vegas.
“I’m happy to get the opportunity to fight this Saturday night,” Shumenov said, “but I wish that I could fight more often.  I’ve been ready since January.  Every training session I gain new knowledge.  I am a completely different fighter than in my last fight.”
Shumenov’s last fight was back in July, in which he defeated B.J. Flores (31-1-1, 20 KOs) by 12-round unanimous decision in Las Vegas to capture the vacant WBA Interim title, making the former WBA light heavyweight champion Shumenov the first professional boxer from Kazakhstan to be a two-division world champion.
By becoming the WBA Interim cruiserweight champion, Shumenov also became the No. 1 ranked mandatory challenger for WBA Super cruiserweight titlist Denis Lebedev (28-2, 21 KOs), who also fights this Saturday in Russia against International Boxing Federation (IBF) champion Victor Emilio “El Tyson de Abasto” Ramirez (22-2-1, 17 KOs) in a unification match.
The WBA has already mandated that the Lebedev-Ramirez must fight Shumenovwithin 120 days. The WBA, however, has failed to explain why it also declared a WBA “regular” cruiserweight world title fight this Friday night in France between No. 2 Yunier Dorticos and No. 5 Youri Kalenga (since upgraded to No. 3), especially after announcing that it would work this year to have only one world champion in each weight class.
Shumenov, of course, is risking his mandatory position by fighting Wright, the former 5-time Chicago Golden Gloves champion.  “I need to stay active,” Shumenov explained why he’s taking such a risk.  “Every fight, I gain experience and it also helps me develop my fighting skills.” 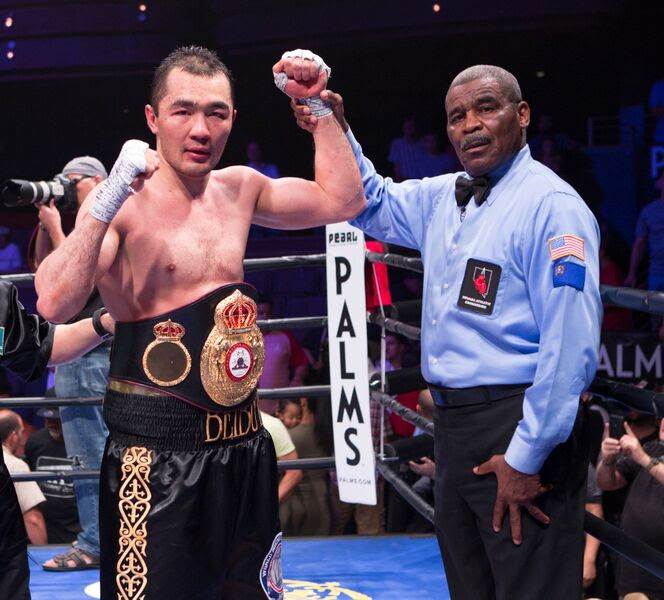 The 12-round Shumenov vs. Wright title fight is on the non-televised portion of The Cosmopolitan show.
Fans may friend Beibut Shumenov on his Facebook Fan Page atwww.facebook.com/BeibutShumenov.