Photos by Manny Murillo / RJJ Boxing Promotions
LAS VEGAS – Determined Phoenix middleweight Andrew “Hurricane” Hernandez shocked heavy favorite Arif “The Pedator” Magomedov in tonight’s main event on the “Knockout Night at the D” card, which aired live on CBS Sports Networkfrom under the neon lights at the Downtown Las Vegas Events Center (DLVEC) outdoor venue.
The “Knockout Night at the D” series, presented by the D Las Vegasand DLVEC, is promoted by Roy Jones Jr. (RJJ) Boxing Promotions.  Tonight’s event was promoted in association with Main Events and Shamo Boxing Promotions.
Before a sold-out crowd, Hernandez (12-4-1, 4 KOs) pounded world-rated middleweight Magomedov (17-1, 10 KOs), winning a unanimous 10-round decision (100-89 twice, 98-91) for the vacant USNBC middleweight title.  Hernandez hurt Magomedov in the third and seventh rounds, finally dropping the tough Russian (WBA #2, WB) #3, WBA #5 and IBF #14) in the 10th.
“This fight changes everything for me,” Hernandez proclaimed.  “He’s very good and deserves all of the accolades he’s received but I now have my head on straight and I’m focused.  My jab was very important tonight.  He’s very strong but I wanted to fight him inside because I knew he couldn’t take it from me.  I was very prepared.  I think I may have broken my ankle in the fourth round but I kept going.  I wanted to finish him, get the knockout, but he’s a very tough fighter.  He has heart and showed why he has all of those accolades.”
Four weeks ago, Hernandez was preparing to fight as a cruiserweight.  He lost 40 pounds to make weight for this middleweight fight in what turned out to be one of the biggest upsets of the year. 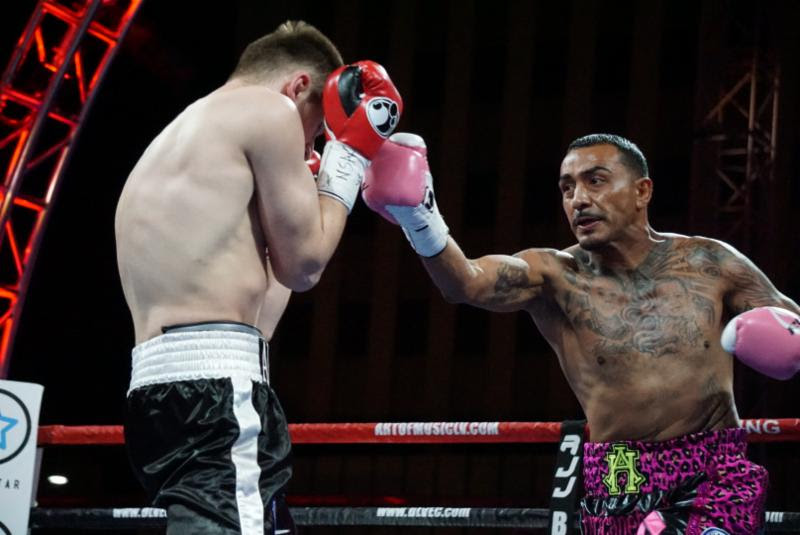 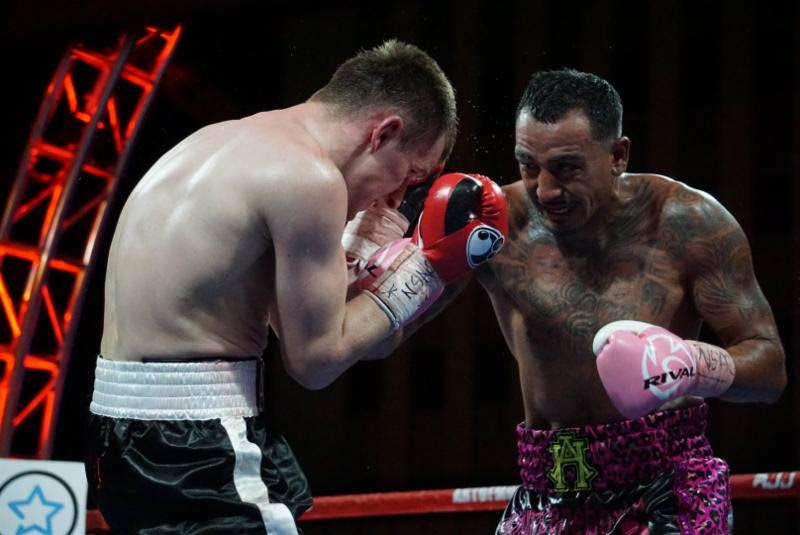 Southpaw super welterweights John “The Phenom” Vera (14-0, 9 KOs), of Fort Worth, and Phoenix’ Joey “Boxer” Ruelas (10-2-1, 4 KOs) went toe-to-toe from the opening bell and they never let up in the co-feature.  Vera exploded in the round of this firestorm, battering the game Ruelas around, until referee Jay Nady halted the action in the sixth round.  Vera remained undefeated and retained his NABA-USA title.
“I knew eventually he’d put his hands down and I’d catch him,” Vera explained.  “I thank him for the opportunity to fight.  He’s helluva fighter, I give him that, but I know I’m a warrior.  I took some shots but gave ’em, too. I broke him down and just kept throwing those lefts.” 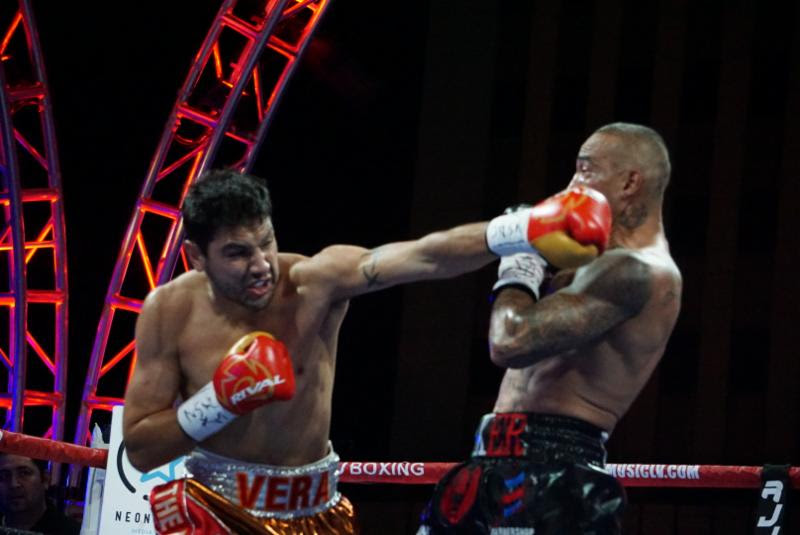 (L-R) – John Vera & Joey Ruelas
In the TV opener, boxing prodigy Devin “The Dream” Haney (6-0, 4 KOs) made history as the 17-year-old – a junior in high school – became the youngest American professional boxer to fight on national television. The Floyd Mayweather, Sr.-trained Haney, fighting out of Las Vegas in front of his rapidly growing fan-base, showcased his vast skills against previously undefeated Mexican invader Jairo “El Leon” Vargas (Fernandez), unloading 14 unanswered punches for a 4th round technical knockout victory.  Nady stopped the fight without counting when a badly hurt Vargas (4-1, 3 KOs) hit the deck hard.
“I happy that I put on a good performance for my fans,” Haney commented after the fight.  “My team put together the strategy to use my jab and breakdown his body.  I picked up my combinations did what I was told to do.” 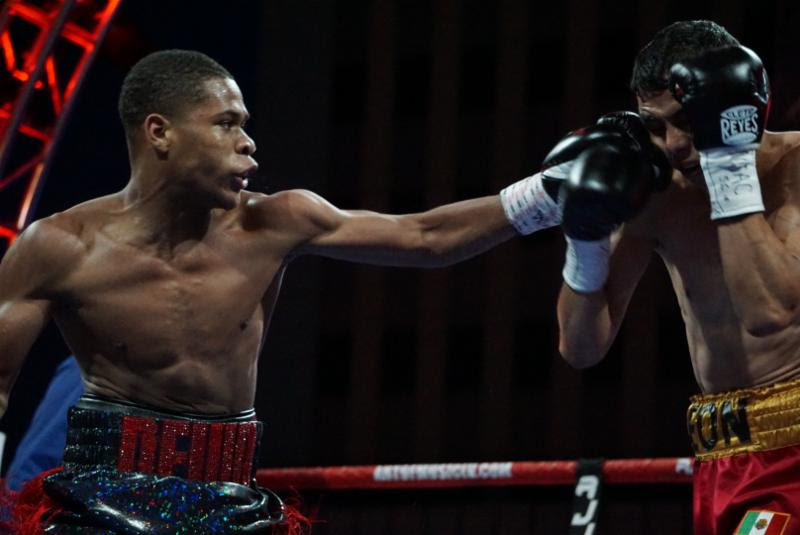 (L-R) — Devin Haney & Jairo Vargas
In a battle of Texas junior welterweights, Tony Lopez (11-1, 4 KOs) dropped previously unbeaten Jerren “Hardknocks” Cochran (11-1-1, 4 KOs) twice with lefts in the opening round and finished him off in the second, knocking him out cold with a punishing right.
“Two mores seconds and I would have finished him off in the first,” Lopez remarked.  “My corner told me that, after the lefts, come back with a right. They gave me the game plan and I executed.” 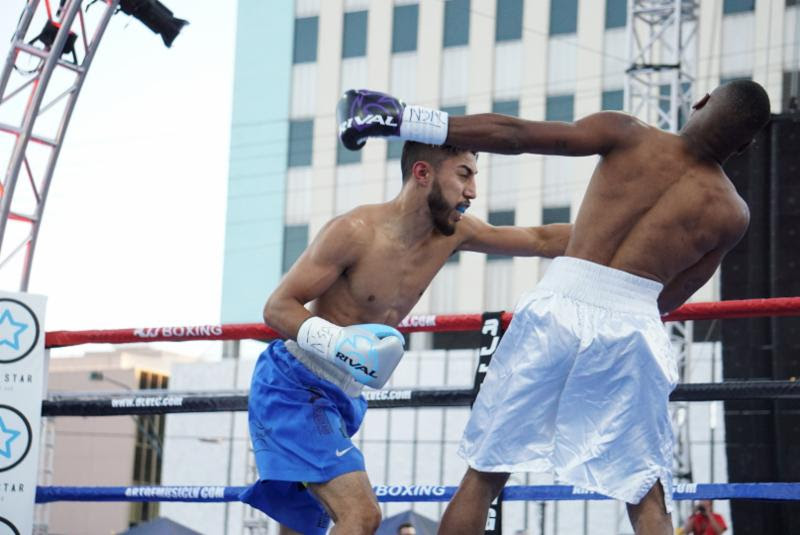 (L-R) Tony Lopez & Jerren Cochran
In the opening bout, Las Vegas favorite Jeremy “J-Flash” Nichols (4-0, 2 KOs) dominated Puerto Rican welterweight Julio “El Indio” Santos (2-3, 1 KO) on his way to a win by unanimous 4-round decision.
“I know I could have done a little better, throwing more combinations and jab,” Nichols said.  “He came in trying but he couldn’t fight.  I sent him back to Puerto Rico with a loss.” 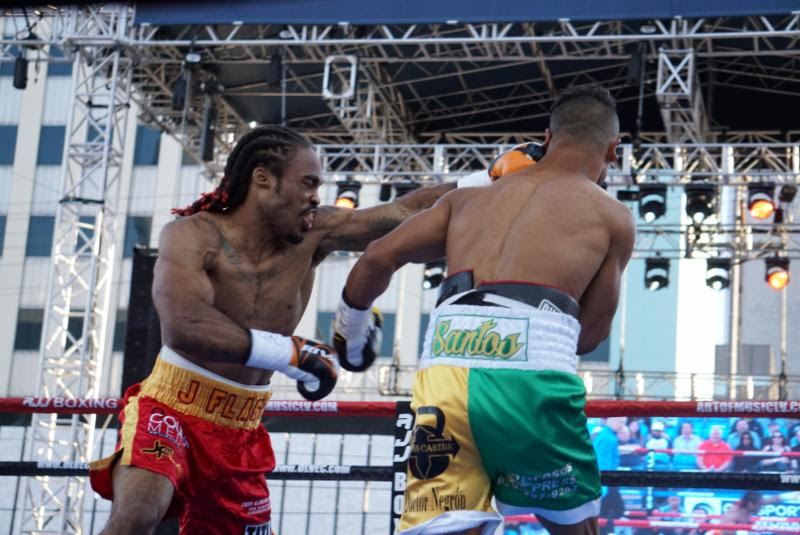