Photo Credit: Tom Hogan Photography/Golden Boy Promotions
LOS ANGELES (June 22, 2017) Lineal and RING Magazine Middleweight World Champion Canelo Alvarez (49-1-1, 34 KOs) and WBC/IBO/IBF/WBA Middleweight World Champion Gennady “GGG” Golovkin (37-0, 33 KOs) today closed out their international press tour with a red carpet film premiere for “I am Boxing” at the AVALON Hollywood that included a Q&A panel hosted by Mario Lopez. Canelo vs. Golovkin are set to clash on Saturday, September 16 at T-Mobile Arena in Las Vegas produced and distributed live by HBO Pay-Per-View®.
Below is what the fighters and their promoters had to say on the press tour:
CANELO ALVAREZ, Lineal and RING Magazine Middleweight World Champion:
“This is going to be a very tough fight against Golovkin. There are fights that are difficult, and this is one of them. I’m going to prepare like I always do at 100 percent.
“I’m happy we are giving the fans the fight they wanted and demanded on September 16 as that is a great motivation to me. This is a very important fight to all of Mexican fans, and I am going to train as hard as I always do.”
GENNADY “GGG” GOLOVKIN, WBC/IBO/IBF/WBA Middleweight World Champion:
“This press tour has been going great, I’ve been waiting 20 years to be in a fight like this. Canelo is a different guy than anyone I have every faced. He is a huge fighter and a great champion. On September 16, we will both put on a great boxing show.” 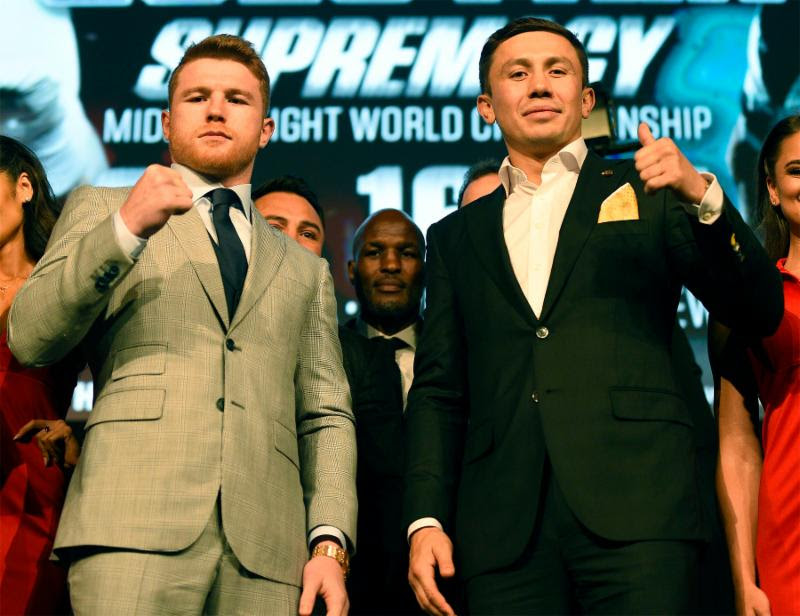 (L-R: Canelo Alvarez and Gennady “GGG” Golovkin pose in New York City, the second stop on their international press tour ahead of their mega-fight set for May 6 at T-Mobile Arena in Las Vegas)
OSCAR DE LA HOYA, Chairman and CEO of Golden Boy Promotions:
“Canelo vs. Golovkin is the type of fight that deserves the spotlight and we are getting that. I am pleased to debut a film, ‘I Am Boxing’ highlighting the middleweight division leading up to this historic showdown with Canelo and Gennady, and I am very proud to have been an executive producer on the film.

“On September 16, Canelo vs. Golovkin will deliver and then some. This is a real middleweight fight between two fighters who have been boxing their entire lives and something the fans really called for, and I believe will end in a knockout.”

TOM LOEFFLER for GGG Promotions:
“There has been such a great response to this fight, and it doesn’t get any bigger than this with the two best middleweights fighting each other.

“These two superstars have a huge international fan base and when you put them both together-the event becomes much bigger. It was harder to make the deal secret than it was to keep it-everyone was taken by surprise and social media was really trending.

“When the training camp video comes out, the hype will keep building and building once everyone sees these fighters in their prime. Team Gennady feels very confident as does Canelo-both fighters wouldn’t take the fight if they thought they wouldn’t win.” 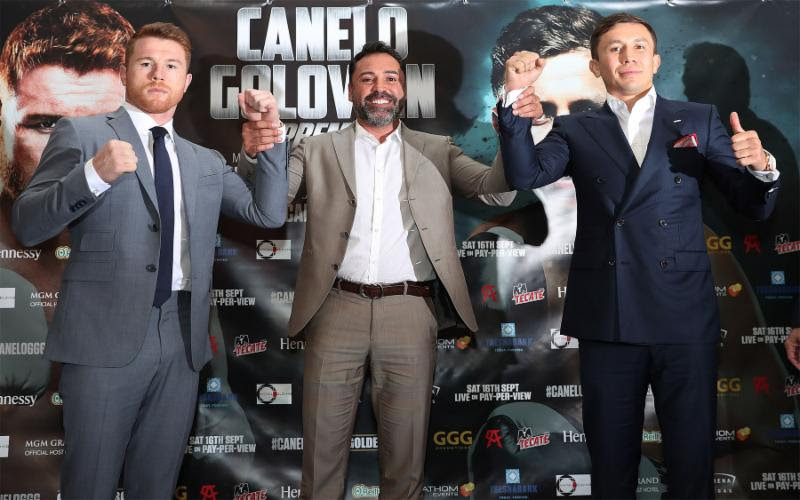 (Canelo Alvarez, Oscar De La Hoya and Gennady “GGG” Golovkin pose in London, the first stop on their three-city international press tour ahead of their mega-fight set for May 6 at T-Mobile Arena in Las Vegas.)
BERNARD HOPKINS, Future Hall of Famer and Golden Boy Promotions Business Partner:
“I expect fireworks in this fight come September 16, but I also look at the fans, and see that this is what they want. This is a fight worthy of a red carpet because they are two future champions-and I believe two future Hall of Famers.
“I feel that Canelo’s versatility will be very important come September, as will ‘GGG’s’ power and knockout ratio. Everyone should be aware, but not scared, as this fight has all the makings of a perfect recipe for a great fight.”
Canelo vs. Golovkin is a 12-round fight for the middleweight championship of the world presented by Golden Boy Promotions and GGG Promotions and sponsored by Tecate, BORN BOLD, Hennessy, Never Stop, Never Settle, O’Reilly Auto Parts, Tsesnabank and Capital Holding. The event will take place on Saturday, Sept. 16 at T-Mobile Arena and will be produced and distributed by HBO Pay-Per-View.
For more information, visit www.goldenboypromotions.com andhttp://www.hbo.com/boxing; follow on Twitter @GoldenBoyBoxing,  @canelo, @gggboxing, @OscarDeLaHoya, @hboboxing and @TomLoeffler1; become a fan on Facebook at www.Facebook.com/GoldenBoyBoxing, https://www.Facebook.com/gggboxing/ and www.Facebook.com/HBOboxing; follow on Instagram @GoldenBoyBoxing, @canelo, @gggboxing, @HBOboxing and @OscarDeLaHoya; and follow the conversation using #CaneloGGG.