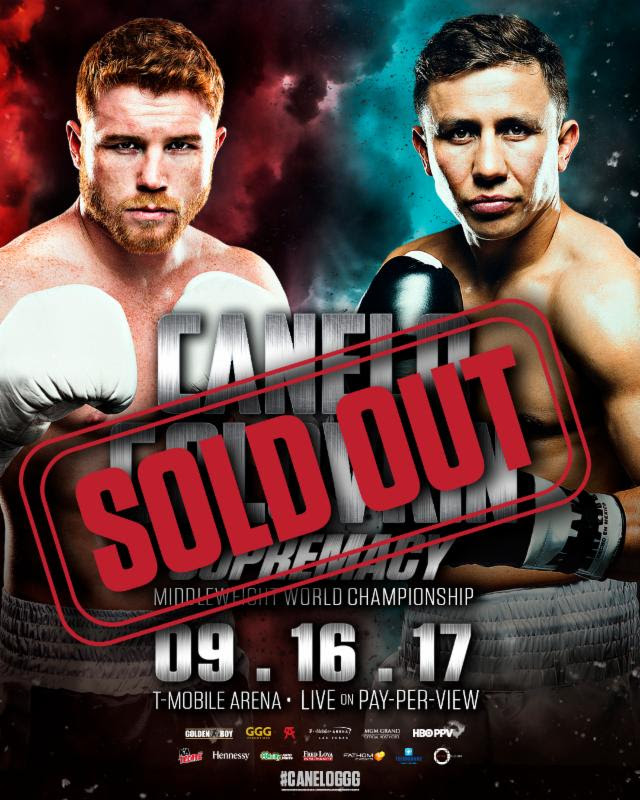 “The boxing public fully understands that this is the biggest fight in many years, and everyone at T-Mobile Arena on September 16 is going to experience a once-in-a-lifetime thrill of watching the two biggest stars in the sport go toe-to-toe, said Golden Boy Promotions CEO and ChairmanOscar De La Hoya. “As we want as many people as possible in Las Vegas for Mexican Independence Day Weekend to experience this battle for the ages, we will soon announce venues showing the fight on closed circuit. And, of course, the best sports network in the business, HBO will present ‘Supremacy: Canelo vs. Golovkin’ on its Pay-Per-View platform.”
“We are grateful for the response from the fans and excited to announce all the tickets being sold out,” said Tom Loeffler, promoter to Golovkin. “When you put two of the best boxers in the sport and two of the best ticket sellers together, this is the result you get.  GGG has now sold out arenas in New York, Los Angeles, Monaco, and London. Now we can add Las Vegas to his resume. It’s the biggest fan and media response we have ever seen and this event should be as exciting in the ring on fight night as it has been for the build up leading to the fight.”
The co-main event and remainder of the Pay-Per-View slate and undercard for Canelo vs. Golovkin will be announced shortly.
Canelo vs. Golovkin is a 12-round fight for the middleweight championship of the world presented by Golden Boy Promotions and GGG Promotions and sponsored by Tecate, BORN BOLD, Hennessy, Never Stop, Never Settle, O’Reilly Auto Parts, Fred Loya Insurance, Tsesnabank, and Capital Holdings. The event will take place on Saturday, Sept. 16 at T-Mobile Arena in Las Vegas and will be produced and distributed by HBO Pay-Per-View.
For more information, visit www.goldenboypromotions.com andwww.hbo.com/boxing; follow on Twitter @GoldenBoyBoxing, @Canelo, @GGGBoxing, @OscarDeLaHoya, @HBOBoxing, @TomLoeffler1; become a fan on Facebook atwww.Facebook.com/GoldenBoyBoxing, www.Facebook.com/GGGBoxing, www.Facebook.
com/HBOBoxing; follow on Instagram @GoldenBoyBoxing, @Canelo, @GGGBoxing, @OscarDeLaHoya, @HBOBoxing, and follow the conversation using #CaneloGGG.